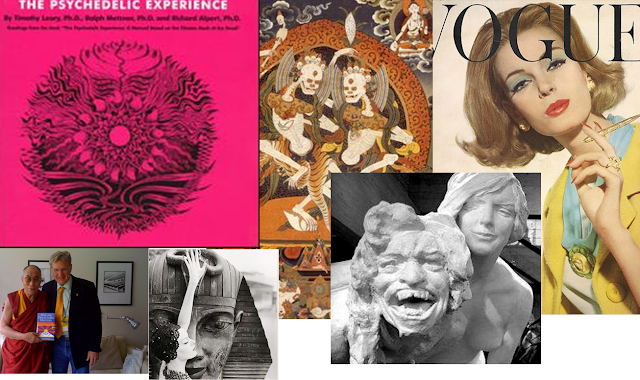 First, examine this D.A. Pennebaker short film chronicling the wedding of Leary and Schlebrügge, "You're Nobody til Somebody Loves You" that includes some "lonely piano" music by jazz great Charles Mingus (which in itself confirms my feeling listening to "Black Saint and the Sinner Lady," that Mingus is Duke Ellington on an acid trip muppet melt-down). Writes Pennebaker:


"This movie is something of a mystery. Timothy Leary was getting married to a model named Nena Von Schlebrugge up in Millbrook, New York at the Hitchcock house, where Leary had been carrying on his hallucinogenic revelries for the past year or so after leaving Harvard. It was rumored that this was going to be the wedding of the season, the wedding of Mr. And Mrs. Swing as Cab Calloway put it. " - D.A. Pennebaker (PH Films) 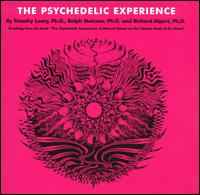 From Leary's "The Psychedelic Experience" - avail. online at Erowid:


The Tibetan Book of the Dead is ostensibly a book describing the experiences to be expected at the moment of death, during an intermediate phase lasting forty-nine (seven times seven) days, and during rebirth into another bodily frame. This however is merely the exoteric framework which the Tibetan Buddhists used to cloak their mystical teachings. The language and symbolism of death rituals of Bonism, the traditional pre-Buddhist Tibetan religion, were skillfully blended with Buddhist conceptions. The esoteric meaning, as it has been interpreted in this manual, is that it is death of the ego and rebirth that is described, not of the body. Lama Govinda indicates this clearly in his introduction when he writes: "It is a book for the living as well as the dying." The book's esoteric meaning is often concealed beneath many layers of symbolism. It was not intended for general reading. It was designed to be understood only by one who was to be initiated personally by a guru into the Buddhist mystical doctrines, into the pre-mortem-death- rebirth experience. These doctrines have been kept a closely guarded secret for many centuries, for fear that naive or careless application would do harm. In translating such an esoteric text, therefore, there are two steps: one, the rendering of the original text into English; and two, the practical interpretation of the text for its uses. In publishing this practical interpretation for use in the psychedelic drug session, we are in a sense breaking with the tradition of secrecy and thus contravening the teachings of the lama-gurus.

Leary's adaptation of the TBOTD stresses ego death rather than real death, and makes the esoteric accessible (though the Buddhist scholars may have been right to worry about careless application, i.e. Altamont, Manson, etc).

Meanwhile, Uma's father, Robert Thurman, has his own Book of the Dead translation, more from an academic angle. And here's where it gets really weird: Leary was introduced to Von Schlebrugge by Salvador Dali; Thurman is a personal friend of the Dali Lama. Get the 'Dali' connection?

Here's what Robert has to say about his relation to Buddhism:

"I’m not a real guru, I’m an academic professor. I may be what they call a kalyanamitra, a spiritual friend of some of these people, offering advice now and then if I’m asked. But I don’t try to take up the role of serious guru. In fact, part of choosing the professor’s or the academic’s life pattern has to do precisely with avoiding getting into the guru game with people. If I had stayed a monk, I would have had to have disciples, which gets you involved in the complications of being a guru, having people develop various kinds of transference toward you and dependencies on you, and I didn’t think that was healthy for them or for me. I was helped in the decision, of course, by my wife Nena, who always insisted on maintaining that I not get deluded about there being anything exceptional about me! She’s been a great spiritual friend of mine, and had the foresight to encourage me to pursue more mainstream academic pursuits. We’re on a pilgrimage together as much as possible." - Thurman in interview for HiLowBrow

Now we go to Nena's own mom, Uma's maternal grandmother, who posed for the below statue: 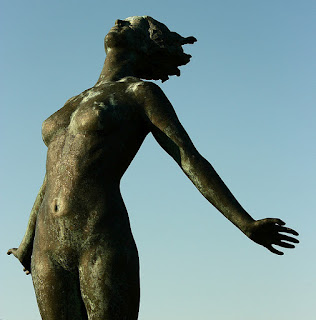 It's cool, but for our purposes the below left one is much more interesting: 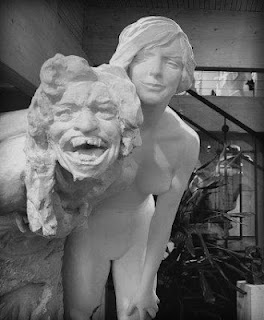 
"The girl to the right is Uma Thurman’s grandmother Birgit Holmquist, married Von Schleebrügge. The sculpture was originally made in 1913, but the artist changed the girl’s face in 1930 and used Uma Thurman’s grandmother Birgit as his model. Birgit later married a German baron in Berlin, but left Germany for Mexico during the war. Uma’s mother Nena Schlebrügge was born in Mexico City, and became a model like her mother, not for art but for fashion. Birgit returned to Germany in later years; she wanted to be buried in her hometown Trelleborg, so that’s where she rests now.

"A “skogsrå” (“rå” is pronounced “raw” and means watcher, “skogs” means “connected to/from to the forest”. Watcher of the forest, in other words) is both a beautiful wood nymph and an ugly hag at the same time. She lures people into the forest with her beautiful looks, and when they are too deep in to find their way back, she turns her back at them and then she looks just like a tree trunk. The charmed one is lost, deep in the forest. The skogsrå or huldra is mainly a trickster, not so much a demon. She can have sex with humans if she wants to, and if she does, they become silent and withdrawn afterwards, because then she has their soul. The skogsrå is also the ruler of all the animals in the forest. "(Source: The curator of the museum Axel Ebbes konsthall and genealogists Bo Lindwall & Gert Påhlsson.)

Surely we can link the creature represented by this statue to both common reports of alien abductions (just using the parlance of their time, long before the events of 1947), and the TBOTD since the description of the huldra matches descriptions of certain kinds of ghost-demons along the way to reincarnation (through the Sidpa Bardo) that come on like beautiful, inviting women writhing in sexual invitation, and when you get close enough to their sexual heat, they ensnare you and become ancient crones, then devouring fiends, rending your soul and/or ensnaring you into the matrix for prompt reincarnation.

On the psychedelic plane, seeing writhing sexual figures in flames or in the passing shadows on the wall is common, and perhaps represents a less immersive version of this lesson, this parable for age and death, the way the invitation to life is always in the process of corrupting itself. Von Schlebrügge is perhaps the princess of this process, at least in a symbolic capacity, and one can perhaps divulge from this that she is an immortal with a soul stretching back to her aeons as Isis herself. 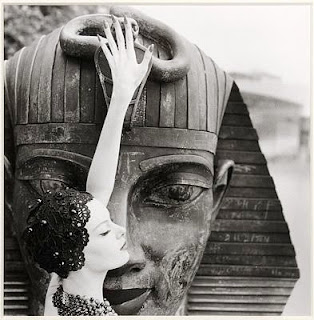 In the 1930s, German anthropologists were searching all over the Himalayas and India, looking for relics and magical boxes and links of Aryan - Tibetan - Indian ancestry (as evidenced in their corruption of the Buddhist image of the swastika, lower left): 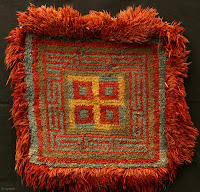 (Uma) Thurman's maternal grandfather was Colonel Baron Friedrich Karl Johannes von Schlebrügge, a German military officer who had become one of the senior Nazi spies in the Americas but who was also jailed by the Nazis for protecting Jewish friends -Wiki:

But I go into more detail on this aspect of the story over in the Acidemic Journal of Film and Media #7: The Nordics issue (check out the expanded Uma Thurman is from Venus story here) I only want to touch on it for the sake of common-thread weaving. We can't ignore facets of the story just because of the evil that resulted. There is still much conspiratorial dot connecting to be done on the relationship of the Vinyanas in the Mahabarrata to the Hannebu UFO aircraft made in Germany under the guidance of mystic Maria Osric. The link above will delve more into it, but even more shall be revealed still...

One can't connect it all without the weird, hard-to-believe encounters with friendly Nordics by George Adamski and Billy Meier. True or hoax, we learn from them and other sources that the Nordics are very tall, as are Uma and Nena.

And here's a fascinating video on Nordics and The Pleiadians youtube made by gorgeous mystic Gigi Young, who looks not a little bit like Nena Von Schlebrugge! Coincidence? She seems to know more than a little about the Nordics and, like Nena, she went from fashion into eastern spiritual realms. Her genetic resemblance to the goddesses above is surely no coincidence

Well, by now the interconnectedness of these links has left me slightly exhausted. I'd like to close by saying I mean no disrespect to anyone I've mentioned. I'm a big fan of Robert Thurman's work in making Tibetan Buddhism both understandable and academically valid in the west. And I adore Uma, and can tell from her photos and choices in husbands that her mom Nena is a hell of a beautiful, deep, deep lady. So... take all I've said with a grain of sand... but know that that grain contains the universe in its entirety in microcosm... Let yourself ponder the weird ways in which the higher levels of consciousness breed beauty with wisdom to the benefit of us all, and realize too, to be beautiful and prosperous is the first step is to become altruistic instead of egocentric. Let go of your morbid self interest, your confusion of plain and 'normal' as good, and as John Lennon said "relax and float downstream... it is not dying." Hell no, JL, it is beginning...

even if all that's beginning is the ending.

Posted by Erich Kuersten at 3:36 PM

I met Nena and Robert a few times in the 90's. They were students of a Tibetan Lama I studied with and they'd pop in for retreats.

I was impressed with both of them. Their consciousness was very high and they possessed more compassion and patience than anyone I'd met studying Tibetan Buddhism.

I just found this article via search as I was reading about Timothy Leary...prompted by a recent radio interview with one of his ex-girlfriends.

I thought of this connection (TBOD) first and thought that Nena must be an amazing woman with high consciousness. She certainly wasn't riding coat tails here...