Uma Thurman is from Venus 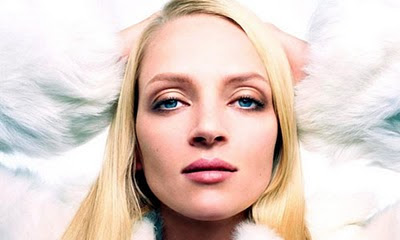 Is Uma Thurman a descendant of the race of tall blonde aliens often referred to as Nordics, and sometimes thought to be from Venus?

Some would say: Yes.

In the late 1940s-50s, there was a fella, George Adamski, who'd met Venusians, he said. This was one of the drawings he did of one of them: 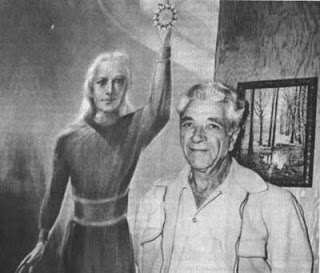 At a 1950s Brazilian UFO conference, a mysterious Venusian queen with her two consorts showed up and savvy (or paranoid) attendees pegged her instantly for the Venusian in Adamski's drawing: 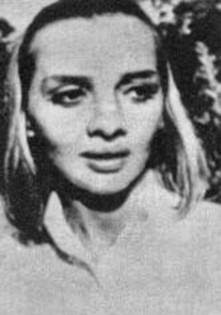 The Nordics are one of the alien races that monitors our progress here on earth. What does that mean exactly? Just remember when you were a kid in grade school. Parents and teachers made sure you got the right tools, but then they'd hang back and let you figure it out, learn, for yourself. Now imagine the Venusian Nordics are your parents, and if they go home after dropping you off at kindergarten (at the dawn of human history) and come back to pick you up at 3 PM when school's out, we're talking maybe a million years instead of six hours. Adamski was likely an NSA disinformant, but the Nordics might be real, they're our space mom. We've already forgotten we have a mom coming to pick us up. We think we live here, in grade school Terra.

The Nazis got involved with these beings via mystics and human sacrifices (maybe), and its thought the blue-eyed blonde haired Aryan represents a strong Venusian/Nordic alien genetic splice bloodline. This through the Thule society. Check out this hot psychic who channeled UFO technology to the Nazis, Marija Oršic: 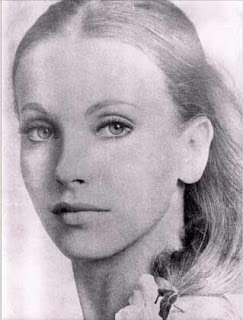 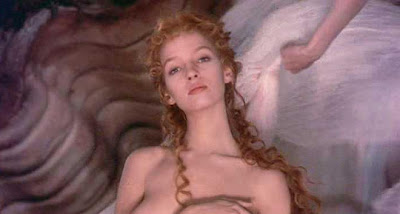 She even played Venus! In Terry Gilliam's Baron Munschausen. (above, below). Notice the similarity between the shell and a flying saucer? Was it a saucer earlier chroniclers saw when they wrote of Venus arriving on a giant seashell? Stranger things have turned out to be far truer.

Uma's father, Robert Thurman, is a renowned scholar whose translations of Buddhist texts like the Book of the Dead have helped bring eastern philosophy to the west. In a future post I'll detail some of the connections between alien races and the demons and spirits of Buddhist mythology, but for now, let's just imagine a Buddhist scholar chosen by ancient gods to raise one of their own, ala the myth of Moses. Just imagine the shell that bore Venus from the sea was an underwater spacecraft (USO, like the raft that bore Moses) bringing her to the shore to spread love, poetry, chivalry and a hierarchy of beauty with her blonde, blue-eyed self as the perfect 10, thus ensuring her race's descendants in the human gene pool are given preferential treatment from then on. 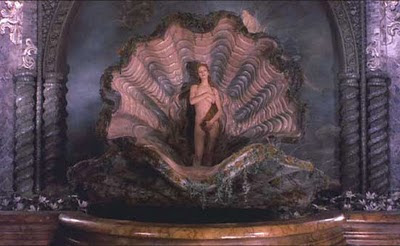 Some Nazi-alien connection buffs theorize that the Nordics and grays are collaborating on this human experiment / boarding school we call life. Apparently there's some contention over the Jews, because the Jewish soul is old and too hard for the reptilians to eat. If the Nordics are the mom, the reptilians might be the evil principal of the school, controlling, punishing and shooting down your ideas of being an artist because 'you're too stupid, and he needs more factory workers.'

Like, why are we torn between the herd mentality of the mammalian instinct and the 'every man for himself' cold heartedness of our reptilian cortex? Who profits from our remaining in dark ignorance and suffering? Have you ever meditated and felt that your magnetic energy was flowing northwards, as if it was being siphoned off you by some giant magnetic vacuum? That meditation only began to return this energy to your own form, recycling and retaining the energy in a loop rather than producing it and losing it to the northern current?? And so it becomes like some inner circuit-breaker interrupts your newfound self-containment and gets you to stop meditating?

There's room in this world for a million interpretations of any single event. What we can all do as we cycle through them, in the meantime is try to understand just how important and vital every single second of our lives truly is. As vast as the universe may be, a single selfless gesture or act of random anonymous kindness can shift the whole cosmos into a higher level. Feel it to be true, feel how each next right action is the only action there ever was or is - and next time you meditate and pray to the Gods, give some love to Uma.... sweet Uma. Can she please come pick us up, and take us on a magic carpet ride or at least get us out of goddamned school?

For more on Adamski and his Venusian friends, check out this blog entry at: Lon Strickler's essential Phantoms and Monsters.

NOTES:
1. Some documentary recently put forth an interesting idea - that this could be a nameless German model, as Goebbels was fond of switching models in for normal Aryans in his propaganda. I guess we'll never know.
Posted by Erich Kuersten at 11:54 AM

I always thought that she was from somewhere else other than the earth.
Her facial features are so strange.

I was searching for Venusians today , and as Omnec onec , George Adamskis girl from Venus photo and Uma share aproximately the same facial features.

And of course the day after Adamski died, someone encountered a Venusian called Adama, who came out of an Adamski style ship... True.

Thanks Tiger and Diamond - you're both damned right. Nordics pick some strange dudes like Billy Meier and Adamski to hang out with when they should hang out with me! One thing I read said that it was because only relatively simple people could handle the massive brain twister minf*ck that is meeting a Nordic.

Amazing article!
But I should make just one observation :
Regarding Nazi's obsession through Nordic Aliens influence, I say it's wrong. Lizards used their (nordic) image and influence Hitler to mass murder in order to their (lizards) goal to an alien invasion.

Your theory flies in the face of what precious little evidence we do have of Commander Valient Thor's presence in the Pentagon. If you research Val, you will find that he had BROWN/Amber colored eyes, hardly blue, AND his hair color and style was changeable, which set him apart, also he had 6 fingers on each hand and 6 toes on each foot, pictures showing only 5 digits on his hand have either been tampered with or are someone else, he was reluctant to show his hands. Dr. Strangers may have had access to certain information about Val and may even have worked within some range of vicinity but I do not think he ever physically met Val, as Val's hands being so different, never came up other than the statement made by Dr.Stranges that he had no fingerprints, which I have not found any record other than Stranges claim stating this. I can find no evidence that Dr.Stranges was escorted to meet Valient Thor by Nancy Warren herself so that leaves me with the conclusion that Val was hardly Aryan, and that Dr. Stranges experience may have been either through high consciousness or a fantasy/delusion due to his affinity with the subject at hand. That's not to say he was lying, just that he embellished the truth to fit mainstream logic if you will.

I am certain that Commander Valient Thor had brown/amber colored eyes, his hair style and color changes occasionally and he had 6 fingers and toes, not 5 as depicted in several photos that may not be authentic at all, the only photo I believe that is genuine is the photo Phil Schneider disclosed. The others may be of others not of Earth, but they are not photos of the being Commander Valient Thor. Dr.Stranges story doesn't ring 100% true in my opinion, Eisenhower wasn't stupid, he would have jumped at the chance to gain technology from this being. That was not what he was offering, exactly. I think he had come to try and help us deal efficiently with the Grey/Reptillian situation through higher consciousness, and that is what they refused- the government felt the ideology presented by Val would not help us but instead leave us more vulnerable. Val was the second ET/EBE faction to propose Farber/Jeff Accountant
higher consciousness as a way out and both attempts by both races were rejected (thank you Mr. Nixon!) to suggest Val was Aryan and assisted Hitler is preposterous! Those who assisted Hitler were not what was presented to the Nazi's in physical form, the Nazi's were tools used by malevolent beings who see Hannity as a blight that needs to be disposed pig, they are jealous and vindictive and interested in service to self, not to help a bunch of looney primates reign supreme, but to use them as tools to enslave all of humankind. These beings apparently long lives but cannot incarnate into an actual human vessel, a sore spot with them.

yeah billy mier sure looks like the wrong guy to be a contact for highly civilized pledians but he was a pledian in past life.nomatter ,omnec onec and valiant thor are the most definitive venutians to date.

Hey thanks !I Never even heard of Omnec Onec
awesome stuff!