Space is the Place (All right all right) Sun Ra Vs. Matt McConaughey 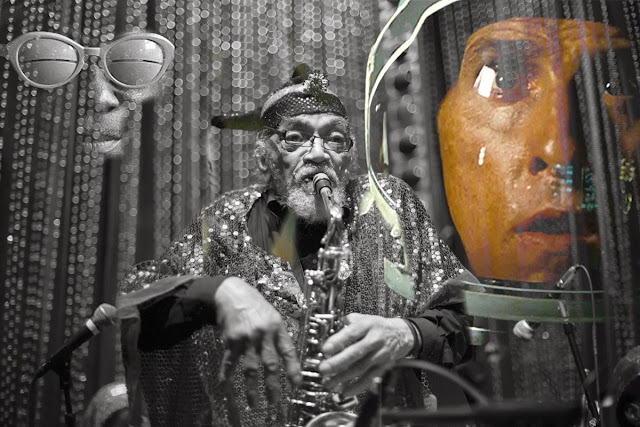 How can String theory and Einstein's space-time continuum be explained via the music of Sun Ra? I think by now you know the answer. Space is the place and free-form jazz is all about time, but it just has to go. And now there's more visual aids out there in the form of INTERSTELLAR, particularly the 'bookshelf' segment. If you haven't seen the movie yet well its entirely your own fault. Time is something you've had lots of... the aliens of your future self’s subconscious are scraping at your cellar door of dreams, so let's dig in... or out. First up is to see this confirmation of how time-space looks when you're able to step outside of it, by which I mean, out of time and space into the nowhere of in between. Observe the video still above of a cougar and a horse running, with each 'moment' captured as time and space move forward (see below video). We can easily imagine these slices in terms of music (the beats) or a strip of film (each frame a slice). In both, if we watch closely (this effect is slightly lost on video), we can imagine we see the slice of black silence in between each snapshot, the flicker of time and space our mind empties out -- death at 24 frames a second.... life on a 4/4  count... or whatever tempo Sun Ra's working on, or celestial frequency tuning into. Near a black hole or outside of space time, of course, the old notes stay around, they don't vanish as each new one comes along, and every image projected onscreen stays there, with the new ones lapping over it.

Now, if we take this 'slicing' of time space and examine the bookshelf scene from INTERSTELLAR we see what time-space's snapshot slices might be visualized as - an interlocked room of bands of time and energy across which one's astronaut mind is fused to the building blocks of the universe time-space itself; the observer defining the observed through the act of observing. When good jazz musicians tap into this, a strange magical kind of ESP forms between the players. They lose themselves in the group mind and their music interlocks to form some new thing, the sound of the galaxy expanding and ever forming and dissolving - each note is there only briefly before the next, each note let go of, freed from being merely a means to a melodic end. Each note is and then isn't.


But when I saw that  crazy bookshelf room in INTERSTELLAR I knew I'd been there. Mine, instead of electric brown, yellow, and gold bands was brown, yellow, and red Tibetan demon lizard god faces, all breathing in and out and watching me with their mouths open, impassive, their strange breathing blowing me around the space as I floated similar to Matt McConaughey in that room. Here's a collage I did trying to give an idea - as you can see the part in the middle is supposed to indicate depth, like a 3-D room, but I ran out of energy. Still you get the idea. 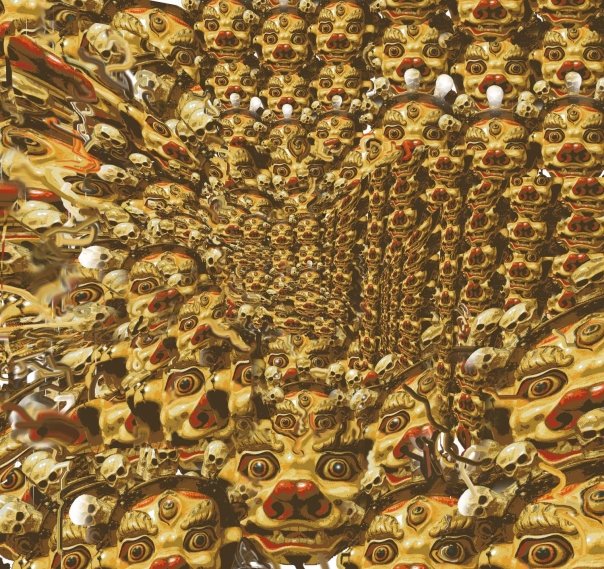 Imagine floating through this as a tunnel or a tubular giant gas bag. Breathing in and out as you pass them as if someone is slowly inflating them and then taking his mouth away from the blow hole to exhale, then repeating -- every demon is watching you yet also not watching you. If it looks familiar you've been there. If you need to ask how I got there, then you're not ready - but I think you know.

Now, take a look at this other still below -again of the cougar and how it would look if it was running towards you:

Now imagine you're from some ancient culture in India, or a prophet in the Old Testament, as I discussed in the Black Hole Hindu Ganesh Ezekiel Connection... and you meditate and fast or chant your way outside of time and space. As your third eye opens wide and transcends and replaces your working normal physical eyes, essentially aligning your entire self, conscious, unconscious, sleeping, waking, dreaming so that you see the same thing with your eyes closed or open - this weird effect, the 'trippy' effect generated in old Doors videos, event horizons (below) replace ordinary linear moment-dissolving consicousness..and we get a glimmer of this zone...

You dig the similarity? The same thing would go for Ezekiel seeing the multi-faced beings and the wheels within the wheels, the multiplication of arms and heads is a result of the trans-space/time affect. What's fascinating is how the meditating yogis know this about the multi-arm illusion caused by this time-space dilation, but the casual Hinduism enthusiast thinks the being just has all these arms - that's the gradual impression left over the milennia. But that's a tangent for another day, bro. Gotta focus... gotta get back to SUN RA.

Well, I mean, I guess, that's it - it's just jazz man. I don't like Sun Ra's music that much --in that i love it for two minutes--but unless I'm way 'out' there it sounds like a six year old banging pots and blowing kazoos. BUT if I ever decide to leave again, to spread out over the outer rims, as it were, I'd love it as I used to. Space jazz, sky church music, as Hendrix called it, reaches out to the beyond times, collapsing normal senses of melody and structure and creating sacred spaces outside therein... like the INTERSTELLAR book nook. You got to get out there before you can get into the sky church music - otherwise it just sounds like noise. 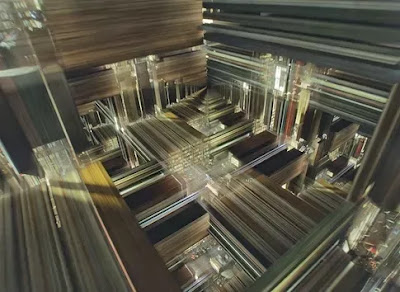 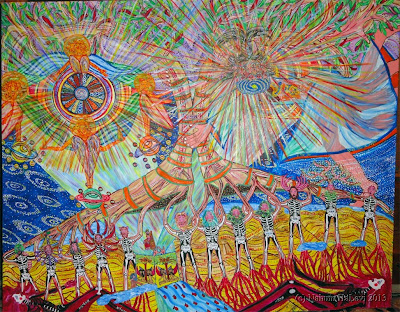 I admire that Sun Ra doesn't actually believe he's from Saturn, but he believes in the power of myth, of fiction, to recreate himself as a myth. I saw him in 1989, singing at the Polish Union Hall in Syracuse, he had twirling dancers and all this pageantry (no fancy lights or anything), then Sun Ra comes up to the mic and in this sweet tiny voice starts singing "I am not from here," to "Space is the Place" or whatever his theme was, "I'm from out there," and in this dingy gray place where you'd expect to see, say, a Varsity awards dinner or some union lodge meeting, or an Elk club smoker, here was this Afro-futuristic carnival space placer. In the freezing hellish snow of Syracuse, those words took on great meaning - a denial, a refusal in a way, that is the heart of meditation, astral travel, music and art - a denial and refusal of the banal limitations of our own place in the time-space continuum. Sometimes we love being here - other times, non.

At least we know the Exit door is never locked... space is the place - from which no traveler returns unchanged.... and they all return, over and over, in every shape and size and space... the ultimate truth about 'out there' is that it's 'in here'. 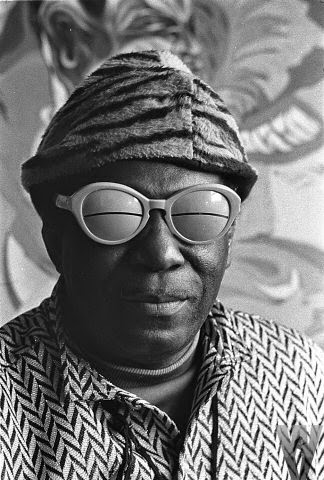 Reminds me of two things. One is the idea presented in the old book, "Flatland" about how a 2-dimensional being would experience a 3-dimensional being: If the 3D being was, say, a globe, the 2-D being would see it, as it moved through the dimension, as a dot dollowed by a small circle, bigger circle, and then as it passed its equator, a shrinking cicle again.

That always made me wonder how we would experience a 4D being.

And THAT, in turn, reminds me of how Vonnegut's aliens see people in the book of Slaughterhouse Five (haven't seen the film). They see us through time as one being - a giant centipede with baby on one end, a growing person, and an old person on the other.

I have not seen Interstellar yet because I have such mixed feelings about some of what I've seen by Nolan. But I think it might be time...

Just stumbling across this site, this post made me have to go back and read the rest and I just have to say you need to get out of my collective consciousness. From the tibetan demon gods to the descriptions of reactions to artists, the artists themselves, and pretty much everything in between, it's like you've been reading my personal diary, and I don't doubt you have. I'll keep checking up because you know how to write my thoughts down better than I can anyways. PS: You might be interested in the ashaninkas and what they call the maninkari, if you're not already familiar.

Hey thanks buddy;;; I read up on maninkaris... I've seen them in visions, the escaping multi-being DNA time/space serpent. They were fleeing their parents... and are responsible for all the vices and ills (greed, sloth, who doesn't have one or the other?) but also for the difference of self and indviduality that creates weird art, and civilization. They're the things that rear up and fight us when we do things that lessen their grip on us, like meditation, yoga-- they create the terrifying images of guardians to paradise we see on DMT... hoping to scare us out of paradise, away from their prison of differentiated self. But whatever, we can't beat them, only learn to recognize them, and keep an eye on them while we continually strengthen ourselves banging up against their bars.

PS - visit my other blog, ACIDEMIC, you might especially like my thing on PROMETHEUS vs. THE DEAD FILES.