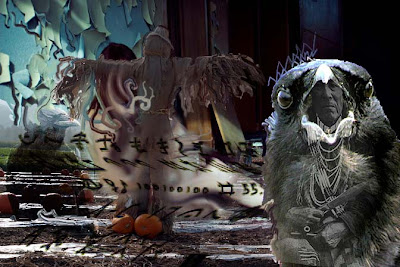 So 12.21.12 came and went. There were no aliens, no volcano erupted, no meteor crashed, no new anything happened and yes haltingly I stumbled like an off-guard Republican at a press conference. I should have cried, or conveyed my sadness, which was even then too deep perhaps to voice. Ah, I said, but the change is within. The change is within us all. The 2012 event horizon is where the personal and the universal meet. Yeah, right.

This is, unfortunately what even Ancient Aliens doesn't understand. There was an AA marathon last night and they were talking of Nazi archaeologists using Buddhism's secrets of astral voyaging --going outside the confines of space and time-- as the foundation of some time machine they had created underground in Hungary somewhere to travel back and forth through time. 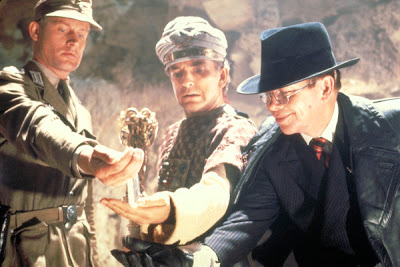 Why would space travel, which is (allegedly) how 90% of alien travel is done to begin with (just as 90% of our communication now is via cell phones and Skype and email), have anything to do with actually lugging some physical body around outside of space and time? The ONLY way to do that is by going through black holes (allegedly), so if your nowhere near one, you're never going back to anywhere, anymore than you can use a chute in Chutes and Ladders if you're not on that square. So it's only when earth is way way close to a black hole in the distant future will we be able to travel back to here, which is how I know, and I've said too much.

If we will ever master time travel, we've already mastered time travel.

As I wrote last month on Acidemic, the horror of facing an immanent personal apocalypse is what makes Xmas movies so cathartic -- i..e. Scrooge crying on his own gravestone while the ghost of Xmas future wags its skeleton finger, or Clarence showing the distraught Jimmy Stewart the dreariness his absence would portend in It's a Wonderful Life. So how could the impending doom of some long-ago predicted doomsday be anything but a guarantor of holiday cheer?

We should of course feel grateful nothing did happen, and find comfort in little everyday miracles. For my family on a dreary Xmas Friday it was finding the face of an alien (left) hidden in a bag of red potatoes! Or in the various jokes and wisecracks, at my expense, as usual. Or the sudden terror I felt when alone here in Arizona in Fred's house and the darkness of the desert night so sudden and ominous the way the pink ridge of evening just plunges straight to midnight made me think the aliens had come for me and had their ghostly trans-dimensional hands around my heart.

Maybe the surest sign of alien intervention is the relentless sameness of our world, where a minor disaster here and there effects only one side of one country, one power grid here or tornado path there, never enough to bring our status quo to a halt, never enough to wipe away our credit card debt in a huge burst of magnetic energy, or enough to wipe out all life through a super volcano eruption or massive meteor strike.

Someone is surely looking our for their investment. 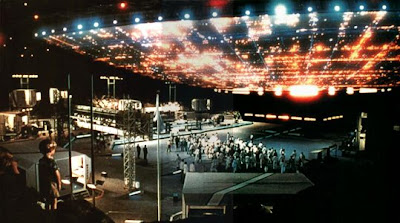 Eckhart Tolle writes about working with inmates on death row and getting them to let go and embrace the light of pure consciousness through meditation. The change is so incredible that oftentimes the result is some sort of governmental pardon, but then -- since the void is no longer so close, the inmate goes back to coveting, scamming, lying and bargaining. Now, in 2013, they'll never want to market all the 2012 doomsday warning documentaries or rerun them on the History Channel. But we'll know this is all a dream, a colored cartoon carnival, an exact duplicate, a remnant, a thought, a sound wave beamed from the inter-galaxial fractal connection, and we are now living on repeat, a holographic image projected over a wasteland world.

Knowing all this won't help, but it won't hurt, and if life is going on just as before and it's annoying the hell out of us, maybe that's on us this time. We just can't wait anymore for some giant heavenly hand to pluck us off into some new dimension, we have to carve it out ourselves. It sucks, but it's true. As the technician said in Close Encounters of the The Third Kind, "it's the first day of school, fellas." -- and I don't wanna go, mom. I'm sick. I've been putting off the dentist, and the doctor, and career-planning, quitting smoking, and drinking Diet coke, all on the off-chance the world ends anyway. Now I have to face the music... 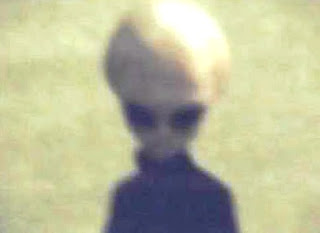 The Truth is a Hoax, Now that is a Lie  My analysis of various alien crash test dummies (Feb. 2)


"if you believe, as I do, in the validity of the phenomena (there's just too much convincing evidence to deny) yet are suspicious of the autopsy footage, it's like poetic justice, like where a guy gets convicted for a murder he didn't do but we cheer anyway because he did murder someone else and got away with it. The hoaxers are like the corrupt cops who fake evidence to get a conviction even though they know the guy is guilty anyway...."


"Everything is fractals of everything else. Compare the alien's treatment of humanity as a whole and the First World's treatment of, say, indigenous populations in jungles and deserts. Part of us want to protect a more primitive way of life, another wants to get rich off exploiting our superiority, and that's how we're viewed by the Galactic Federation led by Lord Ashtar, a kind of extraterrestrial UN. The GF has a hands-off approach: they'll come if asked, but they don't want to mess up our development and turn us into just another cargo cult. Coming in now would be like the adults doing their kids' math homework. So they cordon off our earth, make it a no-fly zone. They only let spaceships come in if they're scientific research expeditions with grants, the way African game wardens might admit zoologists who want to tranq and tag some lions to monitor their populations for some project. Part of the deal is that the zoologists have to obey certain protocol or the wardens ban them from returning. But let's say these zoologists are just a ploy, like in any Tarzan film, there's always the shady greedy hunter who tags along with the goodly white anthropologists; the greedy hunter evades the game warden, i.e. Tarzan, i.e. Lord Ashtar, by hanging out under the cover of the good safari." 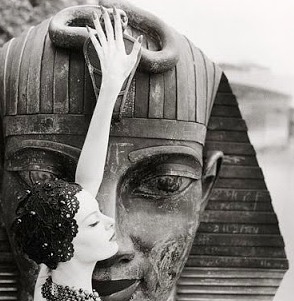 The Tibetan-Nordic-Fashion-Huldra-LSD Aliens Connection
(Uma Thurman is from Venus - Part 2)   (April 6)
My ultra-pronoid connecting of the dots between the Tibetan Book of the Dead, Uma Thurman, Timothy Leary, the Vrill society, ancient Egypt, Buddhism, Nordic aliens, the world of fashion, and psychedelics. 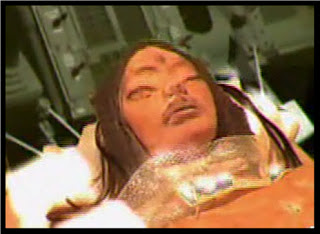 Prometheus and the Moon Maiden (May 17)


"During a top secret Apollo 20 mission, astronauts from both the US and USSR investigated what looked from space like an ancient, huge space craft spotted on the moon. It was/is covered with bizarre markings and has been on the moon for what could well be millions of years. Inside they found a woman of vaguely Eskimo (Mayan?)  mummy descent, her eyes, mouth and ears connected to the still active space craft, both in a state of advanced hibernation. Like the space jockey in ALIEN she was attached to the ship for both life support and some kind of advanced virtual reality reality interconnected piloting."

Zealots of Doubt: Or Why Skeptics are the New Cranks  (June 19)


"The left brain and right brain are in an ideological war. The thing is, the right brain people acknowledge the importance of the left, while the left-brained often dismiss the right as a lot of unreliable balderdash. That's why they fail to see the big picture or if they do, it's as a soulless void." 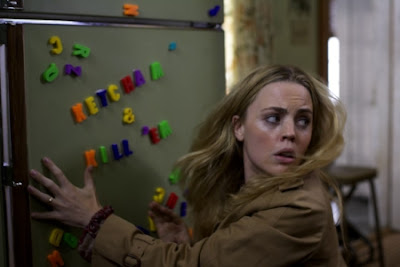 Guide to the Ghost Documentaries of Cable
The top 17 ghost shows, regularly on Travel, Syfy, Bio, A&E, and Discovery are analyzed and reviewed.

The rest are recent enough you can slog them down through the ancient scrolls if you wish, so in the meantime, happy 2013. May you find something new to look forward to, now that there's no doomsday in sight.

From Acidemic:
Unconscious Contact: COMMUNION (2.21)
Where is the line between hallucination / cover memory and the 'real'? How much of the Whitley Streiber story is "true" in a concrete sense vs. the bleeding of dream reality into the real via, say, a hyperactive pineal gland? Again that's like asking what's more real, the top of Mount Everest or the bottom of the deepest part of the ocean? You've never been to either, so what the hell do you know about it? We confuse our TV nature shows with direct experience so why not the reverse? Perhaps our dream lives are the real reality, the only one any self-respecting alien wants to log into. Do sharks dream of being on dry land? Might not aliens look at our waking life like we look at the shark's ocean floor? A nice place to scuba dive, but if we want to do some serious marine biology investigation we have to hoist them onto the boat, as briefly as possible, then tag their dorsal fin and put them back in the water.... which as far as the shark is concerned is like being pulled by aliens into a dream, but that doesn't make us aliens... or does it? (more)

Posted by Erich Kuersten at 3:24 PM

2012 was never supposed to be an apocalypse, it was the end of an old age, and the dawn of the Age Of Aquarius.